You are cordially invited…

There is often great pleasure to be had when you open a book and something unexpected falls out of it.  Over the years, I have collected a number of souvenir brochures commemorating and celebrating various events in London’s municipal history and on occasion an invitation to the event in question has dropped on to the floor while I have been flicking through the pages.

In my own sad little way, I like to imagine that it is the pleasure of my company that is being requested and that in my RSVP I will have to apologise sincerely for not having yet been born…

So, let’s go on a little tour of events that I would love to have attended, but for which my invitation turned up rather too late.

We start in January 1902 in the Metropolitan Borough of Bermondsey and a trip to the Spa Road Town Hall.  The Council is less than two years old and has just completed a project inherited from the Vestry which preceded it – the construction of an “Electric Light and Dust Destructor Works”.   I’m no technical expert, but the broad idea is that the burning of rubbish provides the energy to generate electricity.

The Bermondsey Vestry had first considered the construction of a facility in 1896.  The motion was passed but the process of approval was problematic in the face of sustained opposition from the London Electric Supply Corporation Limited and the County of London and Brush Provincial Electric Lighting Company, both of which had ambitions for supplying electric lighting to the area.  Municipal trading was something of a hot topic for commercial interests.

Yet Parliamentary approval was finally secured and the scheme was able to open on Thursday 23rd January 1902 at an event attended by the great and good together with 1,500 local ratepayers.

The plant (plus adjacent Council depot and stables) had been built on land assembled by the Vestry and Borough between 1894 and 1900.  £21,000 was spent acquiring properties on Limasol Street and Neckinger, buying out the various interests of Mr Arnold Chipperfield, Mr George Carter and the brewers Messrs Truman, Hanbury, Buxton and Co.  The money was loaned by the London County Council at 3.5 percent payable over 50 years.  A further £19,000 was spent acquiring the Barrow’s Tannery site [1].

In 1897, Shoreditch Vestry had been the first authority in London to combine rubbish burning and electricity generation [2], so Bermondsey was hardly a pioneer in this respect.  Nevertheless it represented a sizeable capital commitment for the Vestry and Borough and was not without financial risk.  I’m sure the celebrations came with a great sense of relief.

Another major infrastructure project for a number of the nascent Metropolitan Boroughs was the construction of new municipal offices and Town Halls.  We are now in Woolwich on a Saturday afternoon in January 1906 to witness the opening of the Borough’s Town Hall, which still functions today as the civic centre of the Royal Borough of Greenwich.

Some of the 28 Metropolitan Boroughs found their inherited Vestry Halls to be suitable municipal accommodation.  However, Joanna Smith notes that in both the new London authorities and those Municipal Boroughs outside of the LCC area “expansion of administrative responsibilities and pride in a new status often acted as spurs to building activity” [3].  Woolwich was one such case, having outgrown its Vestry Hall of 1841.

The replacement was a rather grand affair in the Baroque Revival style by Sir Alfred Brumwell Thomas, aesthetically similar to his proposed (but unsuccessful) design for the Deptford Town Hall competition.  In the excellent RIBA/ English Heritage/ RCHME survey of London’s Town Halls from 1999 it is described thus:

“A symmetrical front block has an entrance facade to Wellington Street, so florid that there appears to be more Portland stone dressing than red-brick walling, with a forest of free-standing Ionic columns on the upper and principal storey leading the eye up to a relatively quiet dome”. [4]

If all that Baroque Revival is a bit rich for your appetite, then perhaps we should fast forward to 1947 and the offices of the Borough of Twickenham…

The idea of the “Staff Social and Dance” seems to belong resolutely to the twentieth century alongside retirement presentations, works’ outings to Brighton, employer-owned sports and social clubs and long-service awards.  These trappings of daily working life, which were not unique to the public sector, feel like a distant memory. 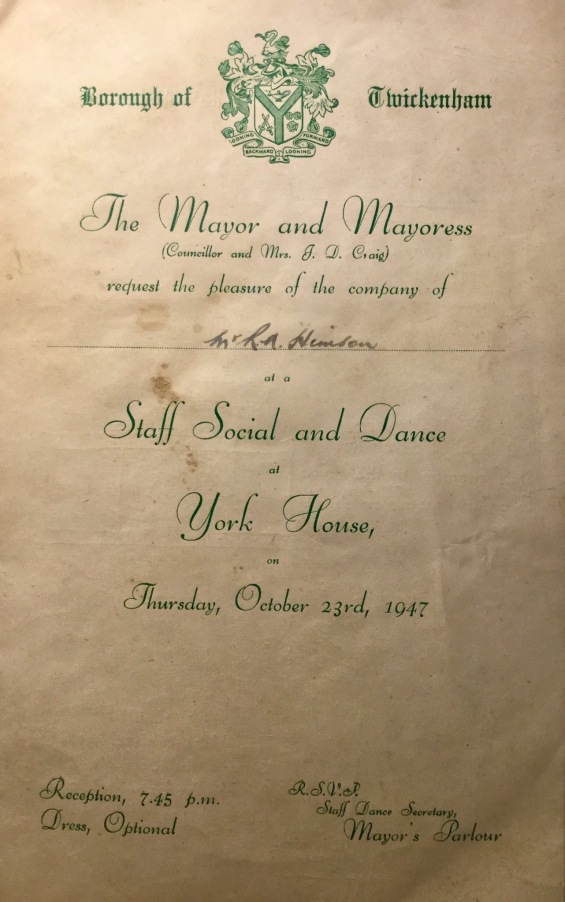 It’s now 23rd October 1947 and the Mayor and Mayoress of Twickenham have asked us to join them for a dinner and dance at York House, the seventeenth century manor house which was acquired by Twickenham Urban District Council in 1924.  What stands out in this invitation is the dodgy old doggerel in the inside pages.  Be sure to read and enjoy this before selecting your outfit for the evening (although formal “Dress [is] Optional”, or I assume that is what they mean…).

One year later and 1948 saw a crowning achievement of the post-WW2 Attlee government – the launch of the National Health Service.  It resulted in the London County Council losing some (although not all) of its medical and healthcare responsibilities.

The event was celebrated at the County Hall on 9th July 1948 for LCC staff “from areas north of the river”.  As a lifelong South Londoner, I guess I should have turned up on another night.

To cope with numbers, guests were issued with either a pink or a blue invitation (we have a pink one).  Pink ticket holders must be seated in the Conference Hall by 7:30pm to hear performances by George Foster (Concertina soloist), Alfred Swain (Baritone), Wilfred Liddiatt (Entertainer) and Mr George Hardy’s Orchestra.  If Wilfred Liddiatt’s unspecified entertainments are not of interest, then you need to get a blue ticket to see the LCC Staff Dramatic Club perform Noel Coward’s “Hands across the sea” at 9pm.

Now to Essex and the Town Hall of the Borough of Walthamstow.  It’s 8:15pm on Friday 26th March 1965 and the Borough’s Council has just met for the very last time.  A few days later and the location would become the new municipal headquarters of the London Borough of Waltham Forest.  We are now at a reception to mark the Borough’s passing after 36 years of existence (although some form of direct local government had been around since 1873).

I love it when small unassuming items yield personal stories.  When I posted this invitation on Twitter back in 2017, it elicited a response from @running_past who had once been based in Walthamstow and recognised the name of the invitees.  Councillor G.R. Smith and Mrs Smith were, in fact, Garner and Vi Smith, who the local MP, Stella Creasy, described as “the epicentre of the local Labour party”.  @running_past kindly supplied a photograph and faces were put to names.

Walthamstow was far from unique, of course.  The London Government reorganisation of 1965 also saw the end of the London County Council after 76 years of service to Londoners.  At 5:12pm on Tuesday 30th March, the Chairman of the LCC declared that the business of the final meeting of the Council had been concluded.  With those brief words, a significant chapter in the governance of London came to an end.

Our final invitation is to the farewell reception held at County Hall on the following day.

When I acquired a copy of the programme for the reception it was not accompanied by an  invite.  But it did come with a parking permit, so I guess I will have to wave that around as I plead to get in.

I consulted the great Labour diarists of the period to see if any had participated in the event.  It would appear they were all engaged elsewhere.  Richard Crossman was recovering from an “appalling” experience with a delegation from Manchester Corporation protesting a decision he had made regarding their plan to purchase land in Westhoughton for a Town Development Scheme [4].  Barbara Castle was tied up with the Cabinet’s Overseas and Defence Policy Committee, discussing military aid to India and Pakistan [5], while Tony Benn records no entry for the day [6].

It was hardly surprising as they probably felt there was little to celebrate.  The London County Council had been a Labour stronghold since 1934 when Herbert Morrison’s hard graft had finally paid off and it had offered an important and consistent power base during a period when the party had enjoyed mixed fortunes.  The London Government Act of 1963, which had brought about its demise, had been a Tory initiative and the process of London local government reorganisation was effectively unstoppable by the time the Wilson government came to power.  Morrison himself had died just a couple of weeks earlier, on 6th March 1965.

Yet all was not lost for the party.  If it had been the Conservative desire to destroy the Labour hegemony in London, then it was only a partially successful strategy.  Too many concessions had been made to Tory-controlled authorities, particularly in Surrey, so that they were denied a structural electoral advantage.  The new Greater London Council would change political hands on a number of occasions until that organisation also came to an end in March 1986.

They signed off with a fireworks display, but I haven’t managed to track down an invite for that one yet…