When an email arrived from the London Society offering the chance to tour Hackney Town Hall, I found myself booked on it within three minutes. I’ve always thought of Hackney as one of London’s iconic town halls, although in my imagination that owes as much to its regular appearances on Thames News in the eighties as to any inherent architectural qualities.

I was keen to see it because a twelve-year refurbishment of the Grade II listed building, initiated by former Mayor Jules Pipe way back in pre-austerity 2005, has just been completed. Led by Hawkins\Brown (who also oversaw the refurbishment of the Council’s inherited Metropolitan Borough of Stoke Newington Town Hall), the project has returned a dilapidated structure to a state of the art civic centre. As such, its fate is somewhat different to that experienced by the subject of my last post.

The current Town Hall dates from 1937. It was designed by H.V. Lanchester and T.A. Lodge, replacing an earlier building from 1866 which stood on the site of what is now the adjacent public square. Lanchester had previous form on London Town Halls, having designed Deptford’s in his first partnership with J. Stewart and E. Rickards, as well as working with Lodge on Beckenham Town Hall. Writing in the RIBA/English Heritage publication London’s Town Halls, Clarke et al describe Hackney as a “well designed town hall in a sophisticatedly restrained classical style” (1). Fully clad in Portland stone, it is the width of the building, rather than its height, that makes it so imposing. 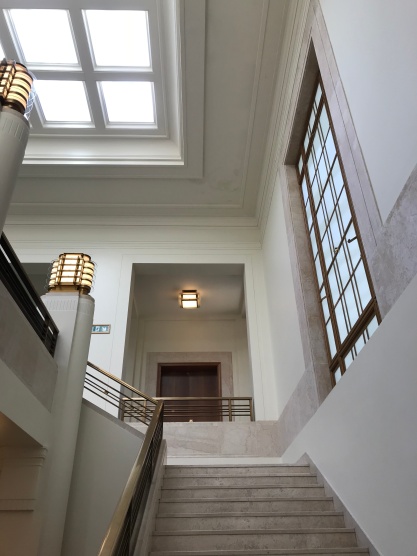 Superficially, Hackney Town Hall bears little relation to Lanchester & Lodge’s earlier work at Beckenham (demolished in the 1990s to make way for a Marks & Spencer food hall), the latter being a brick clad neo-Georgian affair with a substantial central tower. However, look at the plans of each and obvious similarities emerge. The classical symmetry sees the various Council offices arranged off a large rectangular corridor providing closed circulation around the building. The inner courtyard has the Council Chamber placed at its centre on the first floor, leaving lightwells on either side. This isn’t a million miles away from the Beckenham layout, although Hackney has a decent sized public assembly hall at the rear of the site. 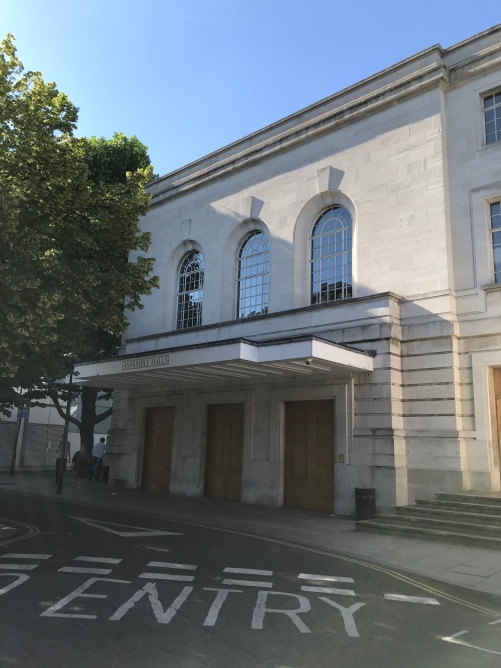 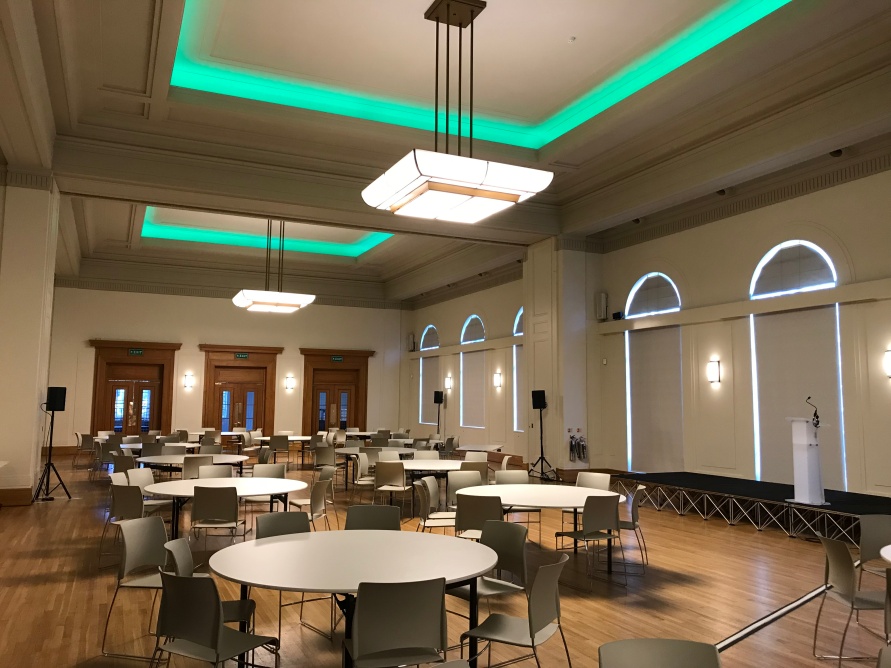 Calveley Cotton’s 1936 publication The Planning of Modern Buildings: Town Halls serves as a record of best practice in town hall planning in the 1930s. He was concerned with every last detail of the design of these spaces, from the siting of toilets to the specification of the ceremonial staircase. Indeed, Beckenham is included in the book as a detailed case study of good design. So, by extension, let’s conclude that Hackney also represented an exemplar at that time. 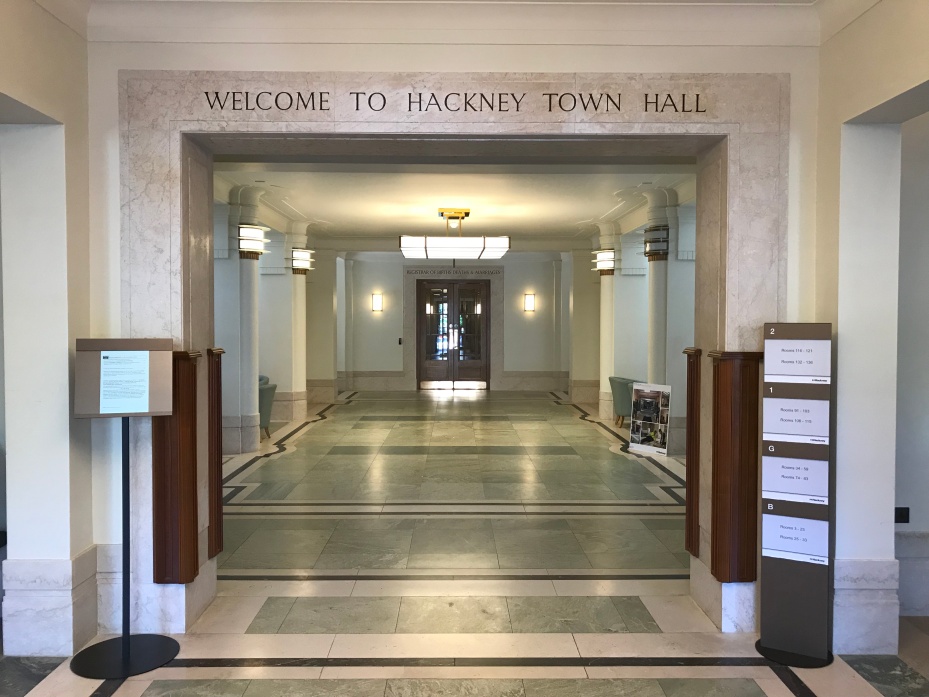 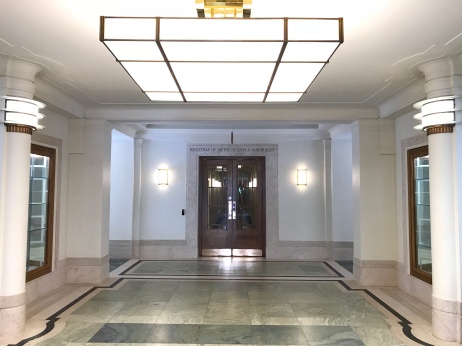 Once inside the building, what is most striking is the luxurious Art Deco design, the preservation and upgrade of which has been a major focus for Hawkins\Brown. This manifested itself throughout on our tour, from the green marble floors of the main public spaces, through to the extravagant light fittings and the beautiful walnut veneers of the Council chamber.

The rare green marble hailed from Sweden and the most cost-effective way of getting more of it was to slice the existing pieces in half, using a technique created and deployed by stonemason James Elliot (2). The light fittings are magnificent and have been augmented by salvaging Art Deco pieces from the Unilever building in Blackfriars. The glorious Council Chamber owes much to the painstaking restoration work of French polishers Mark Horridge and Gary McQueen (3). 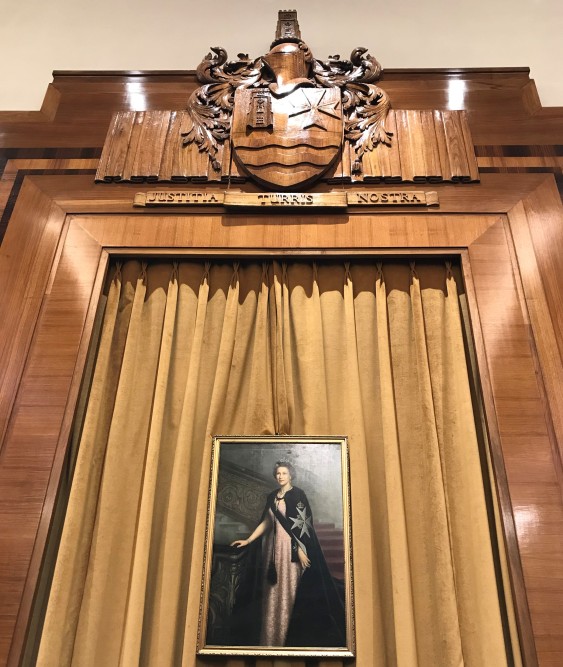 Hawkins\Brown’s design has successfully created new space as well, most noticeably in the lightwells either side of the Council Chamber. These are now covered atria which provide high quality function space. At the eastern end of each stands a bronze anodised aluminium acoustically-treated wall which hides the various services that run up the side of the former lightwell. 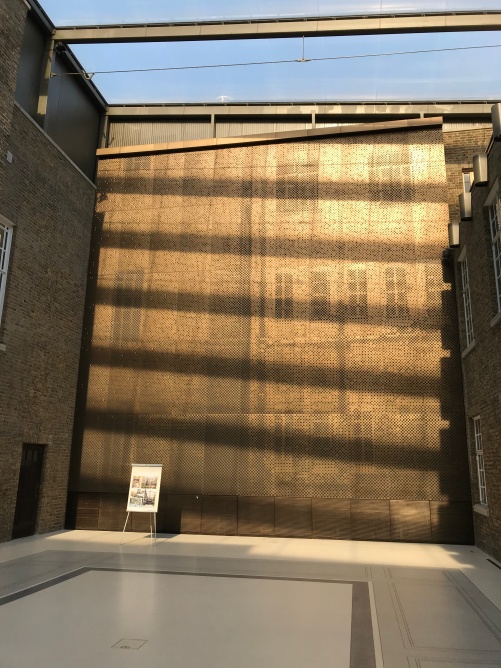 Our final treat on the tour was a trip to the vaults where the hoard of rate-payers cash has been replaced by a small museum chronicling the history of the Council. Someone must have had a lot of fun rummaging through the archives – as the pictures below show, there are some great examples of Hackney’s campaigning from the eighties. 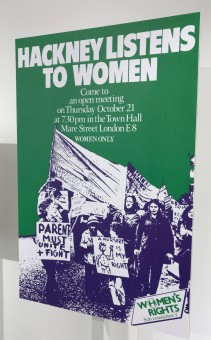 Also on display were copies of the designs for the original Council Chamber furniture which has been lovingly restored by Terry Page (4), replicating his work from the early seventies. The maces and mayoral chains of Shoreditch and Stoke Newington have found a home down here as well. 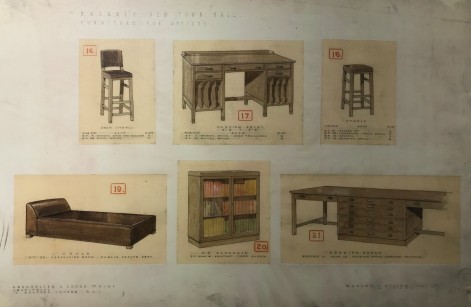 The question will always arise as to whether the refurbishment was a sound use of public money in a time of austerity. Anyone who has had responsibility for the maintenance and upkeep of an ageing and delipidated listed public building will be familiar with the dilemma. On the one hand, refurbish at a great up-front cost and incur the wrath of stakeholders who decry it as a wasteful vanity project and lobby instead for their alternative projects to be funded. On the other, avoid undertaking the big project in favour of an endless process of incremental patches and fixes that never quite gets rid of the sense of squalor while racking up equivalent cost over a longer period of time.

I think in this instance that Hackney got it right by biting the bullet. The project was certainly not cheap (I don’t have a precise number although I have seen various figures quoted which average around £20 million), but it has resulted in savings elsewhere (5). We heard on the tour that occupancy of the building has increased by 70% as space has been reconfigured, allowing expensive off-site rented properties to be vacated. It was also clear that lots had been done to enhance the environmental efficiency and sustainability of the building, with much talk of how the Town Hall was now fit for the next 80 years – the annual maintenance bill is sure to reduce.

Whatever the economics, a London town hall icon has been refurbished to an exceptionally high standard. It is a beautiful asset that the citizens of Hackney can be truly proud of.

I would like to express my thanks to the London Society for organising the event and to Chloe Marshall of Hawkins\Brown and Tara Hudson of Hackney Council’s Communications team for being such friendly and informative hosts. And final thanks must go to Hackney’s Mayor, Philip Glanville, who graciously allowed us to invade his office while he attempted to carry on working!

P.S.  A final shot of one of Hackney’s most famous mayors…