Regular followers of @lccmunicipal will be aware of my occasional tendency to stray away from County Hall and the London Boroughs and into the New Towns of the United Kingdom. This blog is no exception as today we head off to Bracknell in Berkshire.

When writing about the New Towns, the focus is rightly on the ambition of post-WW2 planners, the machinations of development corporations, the boldness of the architectural visions and the myriad social histories of those who embarked on a new life in their new town. All these things fascinate me too, but they are not the primary concern of what follows.

Instead, I am going to celebrate the life (and perhaps mourn the passing) of one particular building. Not, I hasten to add, a masterpiece of the LCC Architects Department, or beloved public library, or brutalist municipal swimming pool. But rather – purists should look away now – a privately owned temple of consumer capitalism that is quite possibly of no architectural merit whatsoever.

But first, Bracknell. In the Greater London Plan, Abercrombie proposed a new town at White Waltham, a few miles south west of Maidenhead, which would serve to decant population from West London towns such as Acton and Southall (1). Ultimately the government decided the development should be sited 5 miles further south at Bracknell and New Town status was consequently designated in June 1949. A population of 25,000 was planned but by 1961 this had increased to a maximum of 60,000.

Progress was initially slow for a number of reasons. First, there was protracted argument over the land to be included in the scheme. Second, the necessary upgrade to the sewerage system and construction of a new treatment works delayed some of the residential development. Finally, the precise siting of the town centre appears to have been the subject of a drawn out debate (2). By the end of the 1950s, good progress on the original scheme had been achieved, but the 1961 decision to increase the population ensured that the story of Bracknell’s development would continue into the 1960s and 70s. 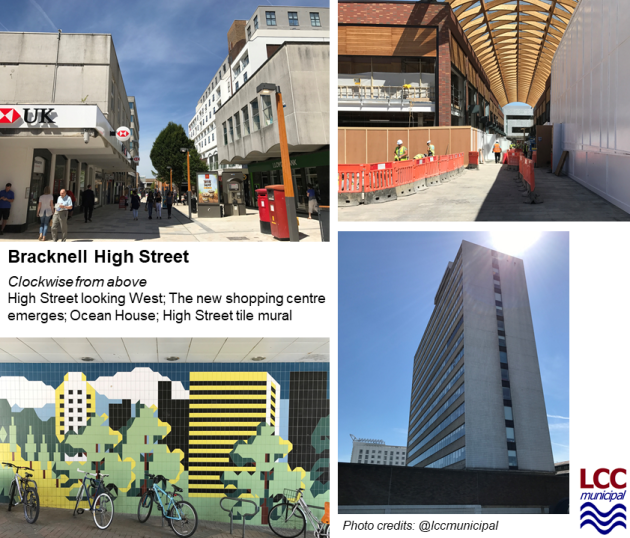 In a parallel life, I might have been part of that story. One Saturday morning in 1980, when I would have been seven or eight, we set off from our South West London suburban house and headed off to Bracknell. I can trace my fascination with New Towns back to this unrecorded day. From the back seat of the car, I was in awe of the ring road, the underpasses, the ramps that whizzed us over the town and effortlessly into the multi-story car park. Even in 1980 there was a palpable sense of newness and modernity about the place. Later in the afternoon we drove around the housing estates and I can still recall how wonderful the neat modern houses looked against the forest backdrop.

Towards the end of the day, my parents turned to me on the back seat and asked whether I would like to live here. I was “well up for it”. We pulled up outside the local College of Further Education and my father posted a letter through the front door. A job application for a senior lecturer position, it turned out.

I say a parallel life, because my father clearly didn’t get the job and Bracknell was never mentioned, nor (as a family) visited, again. That was the end of that.

One of the excitements of that Saturday morning in 1980 is the true subject of this post. Bracknell had a Bentalls department store.

Bentalls was part of our life. My mother and grandmother had both worked in the flagship Kingston store in the 1950s and I too would get a Saturday job there in the late 1980s. Most of our major domestic purchases had been made in Bentalls. Yet we had only known the grand 1930s Maurice Webb designed Kingston store. Here in Bracknell was something strange. There were lots of familiar cues to remind us of where we were, but everything was modern and new. It felt as though we had visited the future.

In 2001, Bentalls PLC, having disastrously overstretched itself with a major development in Bristol, was taken over by Fenwick. Only the Kingston and Bracknell stores were retained by the Newcastle-based group. Now, in 2017, with a major redevelopment of Bracknell town centre underway, Fenwick is to open a new store and the Bentalls name, and building, will finally disappear from the Berkshire town after 44 years.

In 1988, when I signed up as an A-Level student to work in the Kingston store, the Bracknell operation was still only 15 years old. It was the second largest in the chain and while there were newer stores (e.g. the 1980s had seen both the relocation of the Ealing branch to the new Broadway shopping centre and the opening of a joint venture with Sainsbury’s in Tonbridge, Kent), they lacked the glamour of Bracknell.

Bentalls held its Bracknell store in high regard. Having grown beyond Kingston by way of acquisition, Bracknell represented the first purpose-built store for the firm. It was a big deal for, and major investment by, what was essentially a family-run business (albeit one with a London Stock Exchange listing). The decision to open in Bracknell defined the career of the then Chairman Rowan Bentall, the grandson of the firm’s founder.

Healey and Baker, in their role as agents for the Bracknell Development Corporation, had first approached the Bentalls Board in 1964 and after much deliberation a lease was signed on a 100,000 square foot development with a target opening of 1973. Rowan Bentall explained the immediate objectives in his 1974 autobiography:

“Once the agreement had been signed we set about drawing up a full brief and objective. This laid down that the store should aim to be the most modern in Europe; that it should be bang up to date in 1975, although opened in 1973; that it should be open on time and that we should operate in closest harmony with Corporation officials…” (3)

The company’s directors were despatched to Canada, the United States, Japan, Hong Kong and Continental Europe visiting many new state-of-the-art stores for inspiration. These travels resulted in a decision to introduce National Cash Register NCR 280 computerised point of sale terminals – the first store in Europe to install such an advanced system. American influences also led to the incorporation of a new environmental heating and air conditioner system based on heat recovery principles. The entrance from the (by then) pedestrianised Bracknell High Street comprised six glass doors which “at the touch of a button [could] be lowered into the ground” (4). On 5 April 1973, Bracknell got its flagship department store.

In 2017, these features may all sound a little tame, but at the time represented the height of retail innovation and modernity. Bentalls was a very conservative institution. Even in the late 1980s, when I took on my Saturday job, you would never dream of calling someone by their first name and senior staff were entitled to dine in a separate staff restaurant to us mere underlings. I imagine that walking down the directors’ corridor without permission was a sackable offence. Set against this conservatism, Bracknell was a major leap into the dark – a successful one which saw the Bentalls name become firmly established in the Berkshire town.

Until now, that is. I will be sad to see Bentalls demolished. Capitalism, of course, eats itself in pursuit of a financial return, so it is only to be expected. Yet the store represented an act of faith in a New Town. A privately owned department store may not be as virtuous as a public library or municipal swimming pool. T.P. Bennett & Son’s designs for the Bracknell site may not have matched the work of the LCC Architect’s Department. But Bentalls was an important part of the social history and development of the town. It allowed the residents of Bracknell to enjoy the most advanced department store in Europe for a brief period of time.

To provide the pictures for this piece, I returned to the Bentalls store in July 2017 having not set foot in there for over 25 years. Given the major investment in their new retail operation, Fenwick can hardly be blamed for the somewhat jaded state of the place – it was clear that no money had been spent on it in recent years. It was a scruffy shadow of its former self, with the process of emptying the store of its stock well underway.  Yet it was still possible to imagine how new and fresh it must have all looked back in 1973.

And that, ultimately, is what resonates with me the most. A once space-age place, designed with meticulous care for that particular site, for newly arrived residents of the town is being washed away and replaced by something that is bound to be far more generic. Our tastes have moved on and our expectations are in a different league these days.  Seeing the future recede into the past, and our ability to be mesmerised by that future dissolve, always brings a slight sense of melancholy.

The link to the 1974 picture of the High Street frontage: www.flickr.com/photos/bracknellforest/33147297375/in/dateposted-public